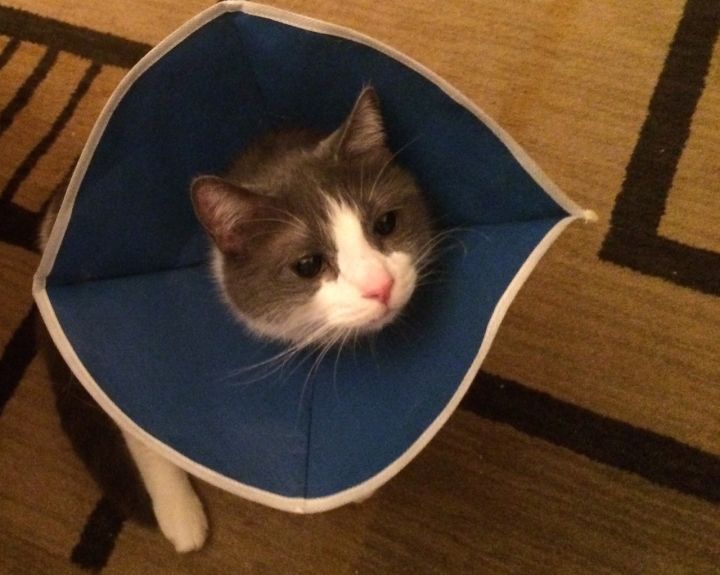 I’m just not that excited today. I’m back from the hospital, sporting one of those dreaded collars. But at least this time they gave me something a little more comfortable. I hate it, and despite my trying, I can’t get it off. They also starved me -I think I’m nothing but fur and bones now.

Dad here: Dr. C. told me the surgery was successful and while they were at it, Jerry got some needed dental work done. He has a single stitch in his paw and he’ll need to wear the collar for a week. We already have an appointment next Friday to remove the stitch and then we can ditch the collar. As normal, as soon as I opened the carrier door in the house, Jerry shot out of the carrier like out of a canon. He is on some pain meds for a couple of days (mainly for the dental work – a tooth had to come out). As usual before anesthesia and surgery, the staff had to fast Jerry – so that’s why he’s grousing about the lack of food. Jerry is a big cat physically (not Maine coon big, but tending in that general direction) – and he’s at about the right weight now for his size – about 13 ½ pounds. Believe me, he’s far from being just “fur and bones”. And Jerry is back to sucking down his food with gusto as normal.

Dr. C. also told me ALL the techs in the vet office were in the operating area with her when she did the operation, cheering Jerry on. And when the staff see me coming in with carrier(s), they get excited and come out front to see The Pride.

This reminds me of the visit I had with the oncologist shortly after the radiation treatment was completed. I sat down in the exam room with him and the next thing I knew he was pulling out his cel phone and making a call. I was a little put out by this until I head his side of the conversation, which went something like this: “Tell them Jerry is in the building.” Then he hung up and apologized for the phone call, saying “If I didn’t tell the staff Jerry was here, they would have killed me. They all want to come and say ‘hi’ to him.”

Jerry here again: It is good to be home again with dad, Tom, and Gordy. I spent the night with dad in bed where, even with that darn collar, I got in good snuggles with him. The best part was when he rolled over on his back, I got up on his chest, and snuggled up to him, cheek-to-cheek.

Dad here: And Jerry purred his brains out. He also maneuvered the collar so the edge was under my chin and he could get close to my face. This was the first time I can recall that he ever cuddled up to my face like that. It’s always nice to be reminded just how soft Jerry’s fur is. Think of a living cashmere sweater and you’ll know how Jerry’s fur feels.

Jerry is really a hero to me – he just keeps rolling with the punches and comes back purring. Nothing really phases him.

That’s about it for now. We’ll post an update on Tuesday when we get the biopsy results back.